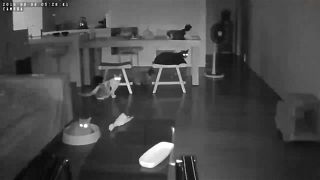 Cats in Taipei get a fright as 6.0-magnitude earthquake rocks the city

Cats in a building in Taipei clearly got a fright as the quake rocked the capital.

The event shook buildings and cut power to around 2,000 buildings, there were also reports of gas and water leaks.

Taiwan is on a string of Pacific seismic faults known as the "Rim of Fire" and is frequently rocked by tremors, including a 1999 quake that killed more than 2,300 people.

The Central Weather Bureau issued a warning Thursday for residents of Yilan, as well as Taipei and surrounding areas in the north and along the east coast in advance of Typhoon Lekima.

High winds and heavy rain were expected during the day, with the typhoon packing maximum sustained winds of 184 kph gusting up to 227 kph.