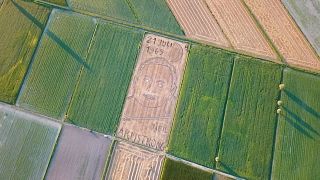 Italian land-artist Dario Gambarin created a giant portrait of astronaut Neil Armstrong, the first man to set foot on the lunar surface, in a wheat field outside Verona to mark the 50th anniversary of the Apollo 11 expedition to the moon.

Gambarin’s land art, created with a tractor and plough on 26,000m2 of threshed grain stubble, was part of a global wave of tributes that celebrated the expedition.