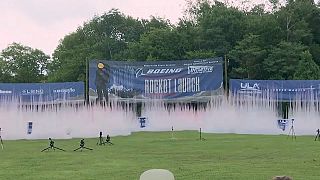 Thousands of model rockets launched in Huntsville, Alabama on Tuesday, 50 years after the Apollo 11 crew blasted off for the Moon.

The launch was carried out by the US Space and Rocket Center, which was attempting a world record.

Huntsville, known as Rocket City, was the home of the powerful Saturn V rocket that took Neil Armstrong, Buzz Aldrin and Michael Collins to the moon.

More than 1,000 youngsters attending the Space Camp counted down and cheered as the red, white and blue rockets created a grey cloud in the sky.

The centre was shooting for an altitude of at least 30 metres in order to set a new Guinness World Record.

The simultaneous rocket launch is one of many events planned commemorating the golden anniversary of the Apollo 11 mission.