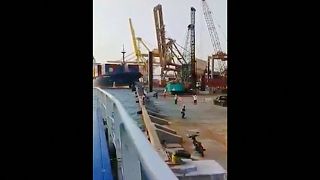 Panama-flagged container ship Soul of Luck collided into a gantry crane in Semarang, Indonesia on Sunday 14 July, causing the crane to collapse.

Video obtained by Reuters showed the crane collapsing on the dock as the container ship barrelled into another smaller cargo ship, and crew evacuating.

The Soul of Luck had been sailing from Port Klang in Malaysia when the collision occurred. It was unclear what caused the incident, local media reported.

A truck operator was injured and the port was closed for three hours after the collapse, local media added.