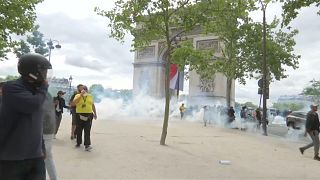 During Sunday's Bastille Day parade in Paris, dozens of yellow vests activists made noise and waved yellow balloons. Police intervened to remove them from the parade.

The famous boulevard was reopened to traffic as soon as the parade finished, but a few hundred protesters stayed to occupy it.

The Paris police said on Twitter that it had ordered the protesters to leave the area or be forcibly removed.