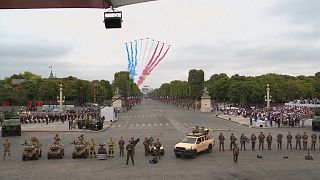 A demonstration of military technology was held prior to the start of the parade, which included ground robots and an armed person riding a flyboard.

The jet-powered flying device was invented by French inventor Franky Zapata, who was given a €1.3 million grant by France's army for its military development.

President Emmanuel Macron presided over the annual military parade as warplanes flew over Paris. Thousands of troops paraded down the Champs-Elysees.

The highlight of Sunday's ceremony was a flypast by French planes emitting red, white and blue smoke the colours of the French national flag.