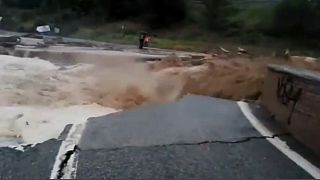 Driver killed as rains cause flash floods in Spain

Intense rainfall has caused flash flooding and power cuts in some villages in the Navarre region in northern Spain.

The main road in the village of Pueyo was split in half by torrential torrents from two overflowing rivers in the area.

According to local media reports, the location received more than 100 mm (3.93 inches) in just several hours, causing Cidacos River to overflow in several areas of the city and surrounding region.

Numerous cars were swept away and homes and businesses flooded.

Late Monday, in the village of Moriones, about forty minutes from Pueyo, firefighters found the body of a driver whose car was dragged away by flash flooding.