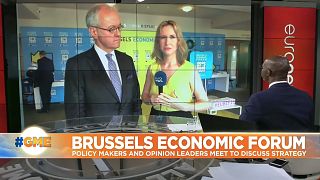 Marco Buti said that Europe could no longer be seen as responsible for economic discipline, while member status focused on growth.

“We should not see Europe in opposition to member states, we are working together,” he said. “I think nonetheless what we need to do for the future, is to reestablish the respective role of member states. We cannot have member states taking care of equity and taking care of growth and Europe being left with questions of fiscal stability, so the harsh face of Europe per se does not work any longer.”

“The commission has done its duty,” he said. “We published a report on the public debt, the member states in the Euro group have supported the commission, concluding that the opening of proceedings for excessive debt is justified. As commissioner Muscovi said the door is open for further evidence, for further information, potentially further measures, the ball is now in the Italian camp”

He said though that policy makers need to work to ensure that the benefits of economic growth are spread.

“We need to establish ourselves at the global level, we are at a moment of global disarray, so Europe can play a role there and we have to shake up the domestic agenda towards more inclusive growth, a growth that benefits everybody,” he told Good Morning Europe.

He was speaking at a meeting of the Brussels Economic Forum, the European Commission's flagship annual economic gathering. Around a thousand delegates are taking part in a day of debate on economic strategy.

Watch the interview with Marco Buti in the video player above.