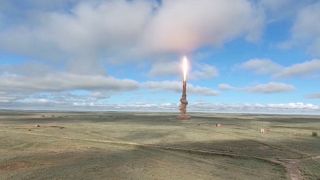 Russian Defence Ministry on Tuesday (June 4) released a video showing a test-launch of a new anti-ballistic missile from Sary-Shagan testing range in Kazakhstan.

The video showed the missile, which the ministry said was part of the country's ballistic missile defence system was brought to the testing-range by a Kamaz truck and installed at the launchpad.

According to the ministry, the launch was successful.