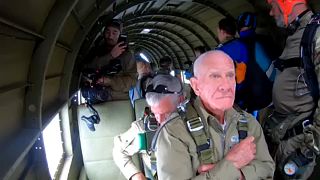 Parachutists landed on the Normandy beaches 75 years to the day when they took part in the D-Day landings to liberate France and the rest of Europe.

The volunteers, including 97-year-old D-Day veteran Tom Rice, made the jump out of the C-47 transporter in tribute to the many men who jumped into the gunfire and death ahead of the 6 June 1944 seaborne invasion.

Speaking afterward Rice said: "It went perfect, perfect jump. I feel great. I'd go up and do it all again."

Rice jumped in a tandem into the roughly the same area he landed in on D-Day - he said it was dark when he touched down in 1944, and he can't be sure exactly where he was.

Rice jumped with the 101st Airborne Division on D-Day, landing safely on that momentous day despite catching himself on the exit and a bullet striking his parachute. He called the 1944 jump the worst jump he ever had.

The jump was a precursor to the all out assault on Nazi positions alongside that stretch of coast which would begin the push into France which saw them marching into Berlin just 10 months later.

Asked how his D-Day comrades would have felt about him jumping, Rice said they would have loved it, recalling that 38 percent of them died.

With the number of D-Day survivors dwindling fast, Rice said he feels he represents a whole generation.

The jump was part of the wider commemoration of the landings on five beaches codenamed Utah, Omaha, Gold, Juno and Sword.

World leaders including US president Donald Trump, French president Emmanuel Macron and UK prime minister Theresa May attended a ceremony to honour the more than 10,000 Allied troops who were killed or injured in the offensive.