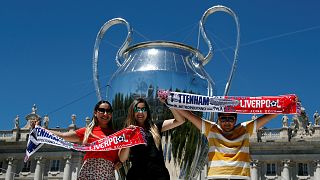 The Champions League trophy was paraded through the streets of Madrid on Thursday (May 30) ahead of Saturday's final between Tottenham Hotspur and Liverpool.

Former players Fernando Morientes, of Liverpool and Real Madrid, and Roberto Sorozabal, of Atletico Madrid, were on hand to walk through the Spanish capital with the silverware.

The trophy was placed on a plinth at the fan park where fans can pose next to it for a photo.

The final will see the two English sides compete for the cup at Atletico Madrid's Wanda Metropolitano Stadium.

Eighty thousand fans from the UK are expected to arrive and only 32,000 fans have tickets.