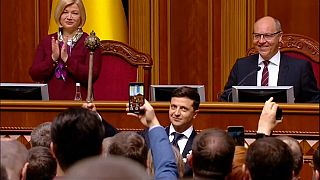 TV comedian Zelensky sworn in as President of Ukraine

Volodymyr Zelensky was sworn in as President of Ukraine on Monday (May 20) in the country's parliament.

The ceremony included Zelensky taking an oath and receiving the President of Ukraine's regalia including a sign, a seal and a club.

Zelensky won the presidency by appealing to voters fed up with entrenched corruption and low living standards in a country that remains one of Europe's poorest nearly three decades after it secured independence from the Soviet Union.