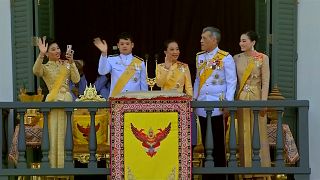 More than 300 hundred drones lit up the sky above Bangkok on Monday (May 6) to celebrate the coronation of Thailand's King Maha Vajiralongkorn as the three-day ceremony drew to a close.

The drones spelled out phrases like "Chakri Dynasty" and the Thai number '10', representing the king's reign as the 10th king of the Chakri dynasty which was founded in 1782. It also formed a silhouette of the king and the message, 'Long Live the King', as crowds looked on.

The king was officially crowned on Saturday (May 4) in ceremonies that mixed glittering pomp with solemn religious rites. He vowed to rule 'with righteousness'.

Thailand ended absolute rule by its kings in 1932, but the monarchy remains highly revered as the divine symbol and protector of the country and Buddhist religion.