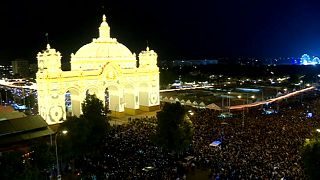 Seville Fair kicks off week of partying with lighting ceremony

Hundreds of thousands of people joined the opening of the annual Seville Fair (Feria de Abril) this Sunday at midnight, marking the beginning of an entire week of dancing, drinking, eating, and socializing.

The traditional lighting ceremony of the entrance arch kicked off the celebrations in the Southern Spanish city.

The entrance arch called "Portada" is different every year. This year the Portada is a replica inspired by the building of the Casino at the Ibero-American Exposition of 1929, held in Seville almost a century ago.

The central area of "Real de la Feria" will be transformed into a giant amusement park until May 11.

In the 1,000 "casitas" or canvas tents,  local families, friends, businesses and politicians host parties from early in the afternoon until sunrise every day of the fair.

About 500,000 visitors come daily to the Real de la Feria fairgrounds, with an estimated economic impact of €800 million.

Due to the timing of Easter this year, the 2019 Feria de Abril actually takes place in May.