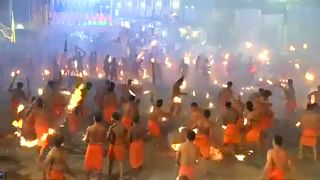 Devotees tossed torches made from burning palm fronds as a part of the ritual, which, according to their beliefs, destroys evil and rids the participants of diseases.

The tradition is part of a festival which honours three of the five elements of earth, water and fire.

The participants split into two groups and throw the burning torches at their opponents. Each person is allowed five throws.