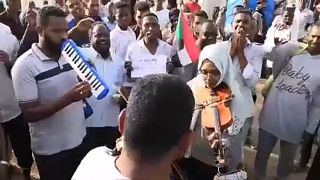 Protesters wake up to their first morning without Bashir in power

Thousands of Sudanese demonstrators gathered outside the defence ministry in Khartoum on Friday (April 12) to push for a civilian government after the military overthrew Omar al-Bashir after 30 years of autocratic rule.

Demonstrators who have been holding almost daily anti-Bashir protests rejected the decision to set up a transitional military council to run the country for two years and vowed to continue protests until a civilian government is established.

Announcing the president's overthrow, Defence Minister Awad Mohamed Ahmed Ibn Auf said elections would be held at the end of the two-year interim period and a military council — which it was later announced he is heading — would now run the country.

It called on protesters to maintain their sit-in outside the defence ministry.