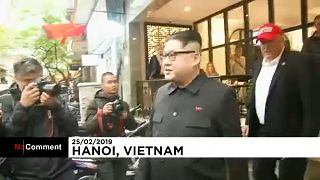 Were Donald Trump and Kim Jong-Un really kissing in a Hanoi restaurant on Monday?

As the real world leaders were travelling to Vietnam's capital ahead of the summit between the US and North Korea on Wednesday, their (very convincing) impersonators were joking around on the streets of Hanoi.

Fake Trump was sporting a "Make America Great Again" hat and the two dopplegangers even exchanged a kiss.

The real summit, which aims to achieve Pyongyang's de-nuclearisation, is expected to have a more serious atmosphere.