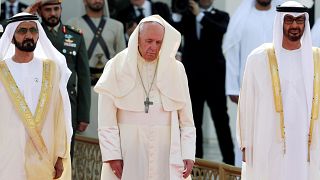 The historic visit saw the pope become the first pontiff to set foot on the Arabian Peninsula, just a day after issuing his strongest condemnation yet of the war in Yemen, where his host the United Arab Emirates has a leading military role.

The pope will meet Muslim leaders and celebrate an outdoor mass for some 135,000 Catholics, an event with no precedent on the Arabian peninsula. He has said the trip, which ends on Tuesday (February 5), is an opportunity to write "a new page in the history of relations between religions".