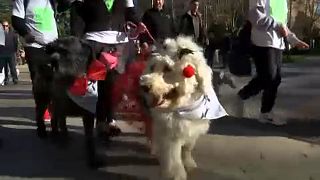 Hundreds of dogs and their owners took part in Madrid's traditional San Perrestre dog walk on Sunday, (December 30), to raise awareness about abandoned animals and to promote their adoption.

Although the event is set up as a race, organisers say that at the San Perrestre there are no winners, timings or medals. The main goal is for people to have a good time walking or running with their dogs and enjoying the festive spirit ahead of the new year.

This year's edition of the traditional charity walk also featured a best costume contest, drawing to the main streets of the Spanish capital displays that included a canine version of Batman, dogs in bow ties and tutus, as well as owners dressed up in costumes of famous fictional characters.

All proceeds of the event go to the El Refugio animal shelter.