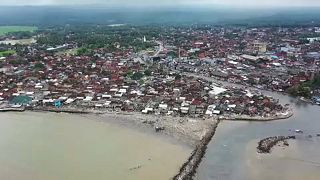 This is aerial footage of the damage done to coastal areas in Indonesia by last Saturday's tsunami.

The death toll from the disaster, which was triggered by a volcanic eruption in the Sunda Strait, has climbed to 430, with 1,495 people injured and 159 others missing.

It has also displaced over 21,000 people and damaged almost 1,000 houses in the affected areas.

The tsunami had a particularly destructive impact on the coastal area of Labuan. Most of the residents there have evacuated to safer areas.