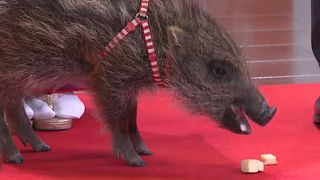 A dog handed over its responsibilities to a wild boar at a ceremony marking the change of year under the Oriental zodiac.

The event, which bridged the year of the dog in 2018 with that of the wild boar next year, was held on Thursday at the Tsutenkaku Tower in Osaka, western Japan.

A humanoid robot was also on stage with the animals. The operator of Tsutenkaku, Masaaki Nishigami, and the robot exchanged a play of words associated with the zodiac symbols, prompting laughter from spectators.