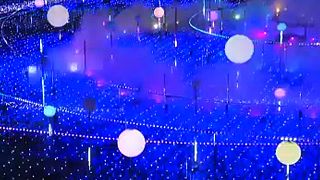 Winter in Japan means warm clothes, hot soup, and illuminations. The light shows are a holiday tradition which run until February. The Japanese believe they're a perfect way of lighting up the darkness during the long winter nights.

One of the biggest light shows is "Starlight Garden". It's located in Tokyo's popular Roppongi district, and has an 'outer-space' theme.

This year, there's a new addition to the light show - a bus offering free rides along the illuminated street. Called the "Magic Illumination Bus", it also plays music, which is synchronised with the lights on the trees.