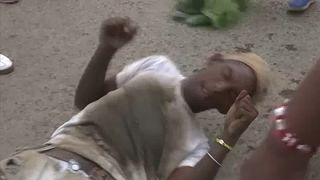 The annual pilgrimage brings worshippers from all over the island to a small church in El Rincon, a town 17 kilometres (10.5 miles) south of Havana, the country's capital city.

Saint Lazarus is the patron saint of lepers, and every year scores of pilgrims make their way to the shrine, a religious rite melding Catholic religion with Afro-Caribbean traditions.

The blend of Santeria and Catholic beliefs is the foundation for people who pay homage to Babalu Aye, the Santeria deity with healing powers, also known as San Lazaro or Saint Lazarus amongst the faithful.

Many pilgrims who come to the church are sick, they crawl or walk on their knees, some carry a cross or a block of concrete on their backs.

Little plaster statues of Saint Lazarus are sold outside the sanctuary and show a man in rags, with dogs licking the wounds on his legs.