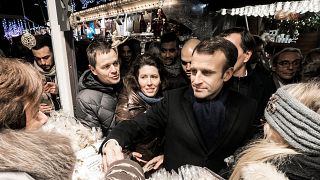 French President Emmanuel Macron on Friday paid homage to the victims of the Christmas market attack that left four dead and several others injured in Strasbourg.

Macron, who headed to the city after a European Union summit in Brussels, laid a white rose in front of a commemorative monument at Place Kleber. He also met with policemen, soldiers and emergency responders.