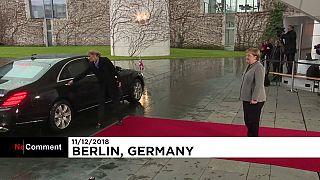 Britain's Theresa May struggled to get out of the car as she arrived in Berlin to ask Germany's Angela Merkel for help on the Brexit divorce deal on Tuesday (December 11).

With a waiting official at first unable to open the door, May's delayed exit was fitting to the delayed key Brexit vote in the British parliament which she suspended a day earlier, acknowledging she would lose it.

Britain's parliament will vote on whether to approve May's Brexit deal before January 21, her spokesman said on Tuesday.

May had been due to hold the vote later on Tuesday, but on Monday (December 10) announced she would defer it and seek extra reassurances from the European Union to make sure it got through parliament.