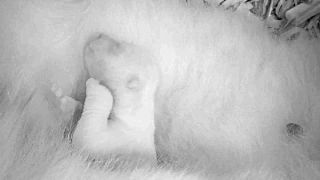 Tonja gave birth to her cup on December 1st. Between March and April, Tonja mated several times with polar bear father Volodya. Tonja and her cub will leave their enclosure until spring when the public can spot them.

For Berlin Zoo, the birth is a happy occasion after its famous polar bear Knut died in 2011.