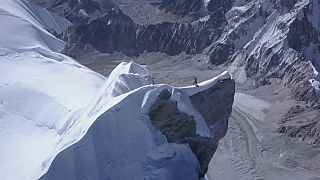 Brexit, Nepal and pygmy whales: No Comments of the Week

Brexit, Nepal, football, protests and pygmy killer wales feature among Euronews‘ No Comment highlights and lowlights of the past seven days.

This week, EU Supergirl Madeleina Kay railed against Brexit with a singsong in Brussels as Theresa May rallied European leaders to back her controversial Brexit deal.

Austrian climber David Lama battled freezing temperatures to complete his first solo climb of Himalayan summit Lunang Ri on his second attempt. He spent the majority of the climb without ropes.

Palmeiras manager Luiz Filipe Scolari received a celebratory soaking by his players at a press conference after his team sealed a League Championship win over Vasco da Gama.

Stirred by a string of high-profile rape trials in the country, tens of thousands marched in Madrid to denounce violence against women to mark the UN’s International Day on the issue.

Six surviving pygmy killer whales from a pod of 10 were found washed-up on a beach on New Zealand’s North Island coast. Thanks to the help of dozens of volunteers, they were transported to calmer waters and released back into the ocean.

In Mexico, a second migrant caravan containing some 500 people arrived in Tijuana, joining 5,200 migrants who had arrived earlier this month.

And in Amsterdam, 16 year-old South Korean Sung Ju Park came top in the Drone Racing World Series, a hobby which is booming around the world, but especially in Asia and South America.