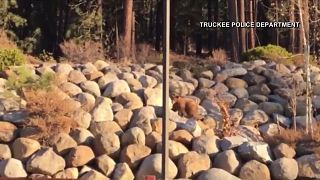 Police in Truckee, California helped to reunite a mother bear with her baby after the cub got stuck in a dumpster.

The bear and her cub were rummaging through a dumpster in Truckee when the lid fell, trapping the baby inside.

Citizens who saw the bear trying to free the cub called the police.

In a video shared by the Truckee police, an officer is seen pulling the dumpster lid up.

The cub then immediately darts out of the container and scrambles up a wall of rocks to his waiting mother.

Police also used the video to remind people to lock their garbage containers, saying "help keep our bears wild!" in a facebook post.