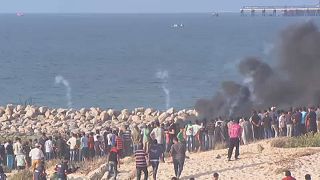 Gaza's Health Ministry said 32 Palestinians were wounded by Israeli fire during a mass protest along the beach near the Israeli frontier.

The ruling Hamas militant group has been staging border protests for the past six months in hopes of easing a crippling Israeli-Egyptian blockade.

It has intensified the protests in recent weeks as Egyptian-mediated cease-fire efforts have faltered.

Since March, 155 Palestinians participating in or attending the protests have been killed, while one Israeli soldier was fatally shot in July.