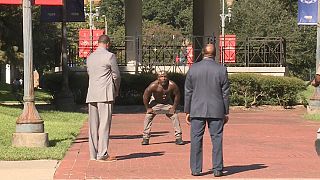 Video from WWL-TV shows an unidentified, shirtless man confronting several people as they move close to him in Duncan Plaza, across the street from the front of City Hall.

When the man pulls the machete from its sheath, the video shows a uniformed state trooper approaching, aiming at the man with the taser.

The man falls to the ground.

State police told the station that the man was being treated at a hospital and would then be held by the Orleans Parish Sheriff's Office.