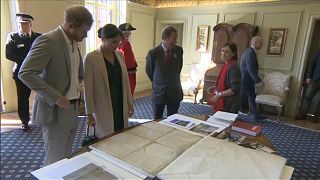 Meghan and Harry inspect US Declaration of Independence in England

The Duke and Duchess of Sussex visited the so-called Sussex Declaration, one of only two known handwritten parchment copies of the American Declaration of Independence, the USA's formative text, at Edes House in Chichester.

The manuscript had been stored for more than 60 years in a strong-room among miles of documents in the West Sussex Record Office, until its significance was revealed by two Harvard University researchers last year.

Measuring 24 by 30 inches (60 by 76 cm), the Sussex Declaration is thought to date from the 1780s and most likely was written in New York or Philadelphia. While other copies and printed versions of the Declaration exist, the only other ceremonial parchment is the Matlack Declaration, which dates from 1776 and is kept at the National Archives in Washington.