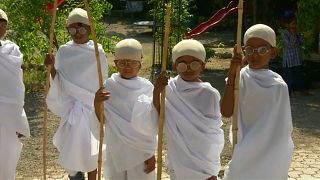 In the western Indian city of Rajkot, 150 students stood in the formation of India's map while wearing baldness caps, glasses and the traditional robes of Gandhi.

On the grounds of a school in the southern city of Chennai hundreds of students took part in a yoga session, also dressed as Gandhi - some also having shaved their heads and covered themselves in white paint.

India observes October 2 not only as Gandhi Jayanti (Gandhi's birthday), but also as the International Day of non-violence - an ideal that Gandhi fought for throughout his life.