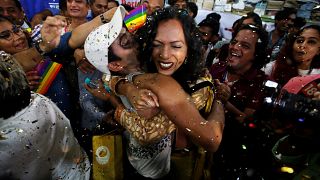 Gay sex is considered taboo by many in socially conservative India, and was reinstated as a criminal offence in 2013 after four years of decriminalisation.

A five-judge bench in India's Supreme Court was unanimous in overturning the ban. Gay sex had been punishable by up to 10 years in jail.

Activists and the LGBT community welcomed the ruling, celebrating in many parts of India.