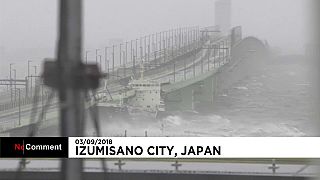 At least 10 people have been killed and more than 300 injured after Typhoon Jebi lashed  Tokushima prefecture on Tuesday, bringing some of the most powerful winds and rainfall in decades.

The Meteorological Agency said the last time a typhoon hit with this level of intensity was 25 years ago.

The storm has prompted cancellations and delays on public transport, while hundreds of thousands of people have received evacuation advisories in the city of Kobe and Osaka Prefecture.

Officials say the rains are bringing the possibility of landslides and flooding. Other advisories, including some evacuation orders, have been issued throughout western Japan.