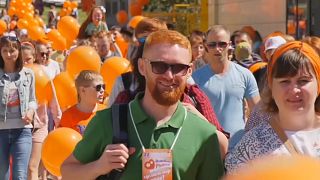 The event featured a parade through the main street of the city, an open-air concert, a vintage car show, and a red-haired pet competition. This year, a hen named Ryaba won.

During the day, a pair of people were also crowned 'King and Queen of the Redheads'.

One attendee, Tatyana, told AP, "In my childhood, I was teased. I was the only one with red hair among my peers, so I didn't even have any 'partners in crime'... But now it is, of course, great, it is really cool, I am very glad."