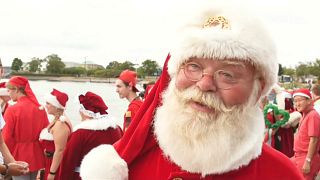 The four-day event was founded by Danish entertainer Christian Jørgen, also known as, “Professor Tribini” Nielsen — who appeared as a Danish Santa in Copenhagen for many years. The idea is to have Santas from around the world come for a “Christmas in July,” the website reads.