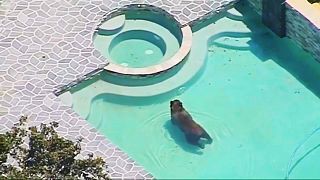 A large black bear roaming a suburban neighbourhood of Los Angeles, California, stopped to cool off from the 32C degree weather in a swimming pool on Tuesday.

The Los Angeles Police Department later said the bear had been contained by animal control officials.

The California Department of Fish and Wildlife estimates the state's black bear population to be between 25,000 and 30,000. Less than 10% of them are found in the area around Los Angeles.