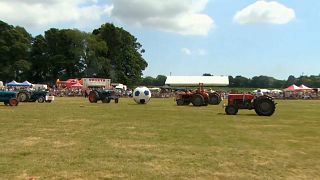 Their national team's absence in this year’s World Cup tournament has likely put off many Scots from watching the games. But at home, their annual Fettercairn Show offers something no other global football contest can — a match between tractors.

Coinciding with the England v Sweden clash on Saturday, around 5,000 spectators instead descended on the small village of Fettercairn in northeastern Scotland to watch vintage vehicles slam a 6 foot football into the goal — a bale of hay on either side of the field.

The packed schedule of events on the day also included Highland dancing, a dog show, races and a cattle contest.