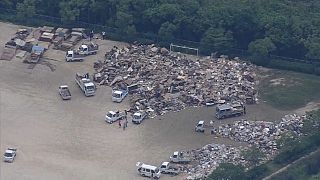 Officials in Japan say the death toll from floods and landslides caused by record rainfall in the western part of the country has reached 149, while 59 remain missing.

Hiroshima Prefecture was the hardest-hit area, with 55 people reported dead.

Local authorities have warned residents in the town of Fuchu to evacuate and stay away from the Enoki River.

Its banks are filled with debris and its muddy waters are spilling onto roads and surrounding residential areas, prompting officials to advise people to move to higher ground.