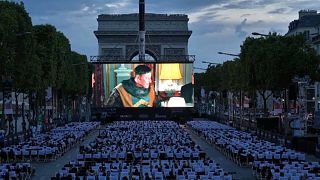 Champs Elysees transformed into open-air cinema for a night

The most famous street in Paris, the Champs Elysees, was transformed into a giant open-air cinema on Sunday (July 1).

Rows of deckchairs and a screen were installed in the middle of the tree-lined avenue normally bustling with shoppers and 1,700 people, selected through a lucky draw, watched classic French movie "Les visiteurs" ("The Visitors").

French actor Jean Reno, who plays the role of the knight in the movie, showed up for the unusual screening.

The event was organised as part of the national Cinema Festival which allows people to go to the cinema for a reduced ticket price of €4.