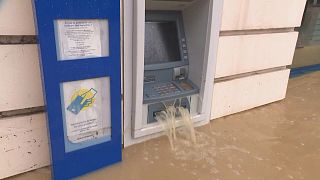 Floods have beseiged the town of Salies-de-Béarn, France

Floodwater has invaded the streets of Salies-de-Béarn (Pyrénées-Atlantiques) and other towns in the south-west of France overnight.

The water, at times looking more like a canal, has receded in parts, leaving mud and sludge for property owners to try and clear. Nearly 65% of the municipality was flooded with up to 1.60m of water in the streets.

Many residents had to leave the premises, but there were no reported casualties. Due to the speed of the floodwater not everyone had time to flee.

Firefighters had to use helicopters to evacuate people. A flood has not been seen like this in the city for more than half a century.