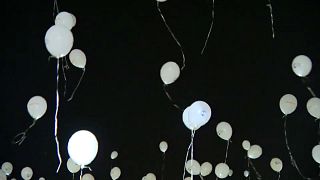 Thousands of balloons released for missing children in Hungary

Thousands of balloons lit up the night sky in Hungary on Sunday in honour of missing children across the country.

Launched in 2011, the annual Night of a Thousand Lanterns Foundation event seeks to raise awareness about child disappearances, which organisers say are growing each year.

More than 50 musicians performed in 10 cities across Hungary as part of the event, before some 10,000 illuminated balloons were released into the air for the missing children.