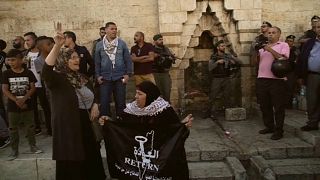 The unrest comes the day after Israeli forces killed dozens of Palestinians at a mass protest at the Gaza border, most by gunfire, and injured more than 2,700, according to Gaza health officials.

Demonstrators had gathered at the square outside the gate as part of Nakba Day Protests.