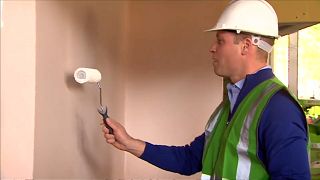 Britain's Prince William rolled up his sleeves to help paint a wall in a new boxing club, being rebuilt after the Grenfell Tower block fire in west London last summer.

Ahead of his 'best man' duties at brother Prince Harry's wedding to Meghan Markle on Saturday the Duke of Cambridge joined host Nick Knowles of the BBC's programme "DIY SOS" on the site of the new Dale Youth Amateur Boxing Club.

The prince's painting skills were filmed for the programme, which is rebuilding the club not far from the destroyed tower in north Kensington. The club was previously located on the first floor of Grenfell.