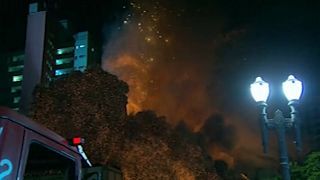 Firefighters said at least one person had been killed in the collapse and that there could be more.

The building, a former federal police headquarter, caught fire around 1:30am local time. Firefighters set up a perimeter and worked to evacuate people.