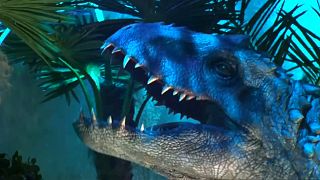 Dinosaur fans of all ages were sent back to the era of reptiles when they visited the "Jurassic World" exhibition in Paris that features real-life sized dinosaur displays.

Opened to the public on Saturday, the exhibition featured moving giant replicas of dinosaurs, including stegosaurus, triceratops and the ferocious T-Rex.

Attendees walked around a space transformed into a dimly lit jungle as monstrous roars echoed all around. They also experienced a fake laboratory where mock baby dinosaurs dozed in incubators.

Held at the La Cite du Cinema hall near Paris, the exhibition will last until September 2.