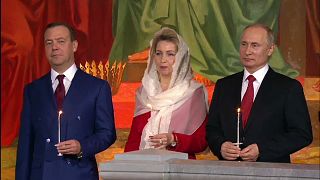 Hundreds of people gathered in the Cathedral of Christ the Saviour in central Moscow on Sunday for Easter Mass led by the head of the Russian Orthodox Church, Patriarch Kirill.

The Orthodox world marks Easter this year a week later than the Catholic and Protestant churches.

In a televised Easter message, Patriarch Kirill said evil was still "unable to rule over mankind".