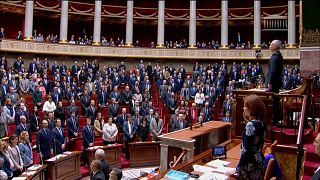 France's lower house of parliament on Tuesday observed a minute's silence to pay tribute to the victims of the Islamic extremist attacks in southern France last week. Four people were killed in the towns Trèbes and Carcassonne.

A national memorial service is to be held in Paris on Wednesday to honour police officer Arnaud Beltrame, the police officer who lost his life after standing in for a hostage at a supermarket in Trèbes that was attacked by the terrorist.