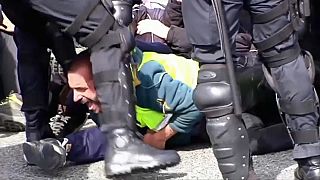 Catalan police on Tuesday removed pro-independence protesters who were blocking a motorway near Figueras, in Spain's Girona province.

The protesters blocked an important route to the north of the Catalan region early in the morning to protest against the arrest of former Catalan President Carles Puigdemont.

Puigdemont is in custody in northern Germany awaiting a court's decision on whether to proceed with an extradition request by Spain.

Spanish authorities accuse Puigdemont of rebellion and misuse of public funds in organising an unauthorised referendum last year on independence for Catalonia.

Debate: What does the Italian election result mean for the EU?