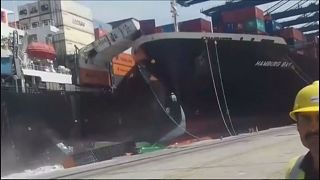 Authorities in Pakistan's southern port of Karachi have launched an effort to retrieve 21 containers knocked overboard after a ship moving into its berth brushed against a stationary vessel on Monday, officials said.

No one was injured in the incident at South Asia Pakistan Terminals (SAPT), a subsidiary of Hutchison Port Holdings of Hong Kong commissioned last year, and port operations were not suspended, the terminal operator said.